Blurb of Chockstone Cabin
Emily and four of her classmates are the brightest students in a distinguished high school. To spend their last autumn as seniors, they decide to spend October 31st at a remote resort—a nice cabin named Chockstone. Their relaxing retreat soon comes to a crashing halt when one of them witnesses a horrific attack, signaling the end of their fun….and the start of a gruesome nightmare. 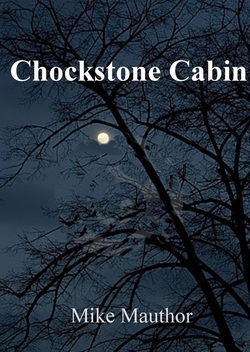 Completing all fifteen questions, they packed up their belongings and ended their session, glad that the sun brightened the sky for them to spend the remaining day elsewhere, or in Emily’s case, back at home. At the foyer of the library, Eric excused himself to use the restroom while both Emily and Cara waited for him. For a brief awkward minute, they did nothing and said nothing to each other but then Cara decided to search in her pocket and out came her cell phone as she started reading her text messages.
Emily decided to gaze through the main glass door of the library, looking at the individuals that went to the drop box outside as well as others that left and arrived in the building. Bored of just watching random people, she twirled the tip of her hair, pondering on how she would get top marks on her AP calculus homework that’s due next week.
“Hey!!” Cara’s voice shook Emily away from her thoughts. Her finger unwound her hair.  Her bewildered face stared at a frail-looking old man wearing a collar shirt with trousers and sandals. His liver-spotted left hand clung onto Cara’s forearm, with ardent, troubled eyes staring into hers.
“Don’t go to the cabin,” he said presciently.
What? Emily thought, startled that this was occurring in front of her.
“Don’t go,” he said again, pleading as though he was Cara’s grandfather bearing the truth about life itself.
“Let go of her,” a vehement voice behind Emily said. Wincing, Emily spun to see Eric before she went back to the old man who let go and then backed away. His wide eyes flashed a pleading glare at Emily and mouthed the same words again. For some reason it gave her the chills, the hair on her forearms pricked up. The old man hurried away, exiting the library with a book that Emily spotted at his other hand. He took a turn, disappearing at the corner as though he was a ghost.
“Did he harm you?” Eric asked Cara.
“No,” Cara replied, shaking her head. “I’m fine. I’m just more startled by his presence. I didn’t see him coming.”
“Me either,” Emily replied.
“Come on, let’s go,” Eric said. “Sorry I took so long.”
And with that they all left the library, walking back to the neighborhood where Eric left his car, ready to drive Cara home. Emily was only minutes away from her home. During their journey back, none of them mentioned the brief incident with the old man, it was as if it was nonessential, especially his eccentric message. Emily’s logic of the situation was that the poor man probably forgot to take his medication, he didn’t look too healthy. She arrived to see her father, who was now at home. She couldn’t wait to talk to him, maybe get his suggestion of a good book to read as she rushed into the kitchen and gave him a tight I-Miss-You type of hug.